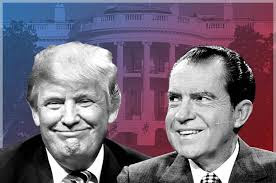 "Modified Limited Hangout":  From the Watergate era, "The phrase has been cited as a summation of the strategy of mixing partial admissions with misinformation and resistance to further investigation, and is used in political commentary to accuse people or groups of following a Nixon-like strategy."


The president suggested he could be investigated for obstruction of justice as part of the Russia investigation because he was “fighting back” and reiterated there was “no collusion” between his campaign and Moscow.

Trump: one person's obstruction of justice is just me "fighting back." Move along!

Here's another Watergate- era expression:  "smoking gun."  In Rump's case, he fired the gun directly into his foot on national television, so no sophisticated forensics needed there. Then, for good measure, he re- loaded and fired again in the last 24 hours:


“You’ll define it for me, but I can tell you, there’s no collusion,” Trump said. “I couldn’t have cared less about Russians having to do with my campaign."

So, now the defense is, "well, the Russians were colluding with my campaign right in front of me, but I wasn't concerned about it"?  Yeah, that'll fly.

Meanwhile, Rump is, once again, acting as his own legal counsel:


“I’m looking forward to it, and I would like to do it as soon as possible,” Trump told reporters at the White House as he was preparing to leave for the World Economic Forum in Davos, Switzerland. “I would do it under oath, absolutely.”

Which caused his team of legal beagles to, once again, plotz:


Trump’s White House lawyer, Ty Cobb, told the Times the president’s comments were made off-the-cuff and tried to downplay the gravity of the statements.

“He’s ready to meet with them, but he’ll be guided by the advice of his personal counsel,” Cobb told the outlet. (our emphasis)

"He'll be guided by the advice of his personal counsel."  Hahahaha!  Yeah, that sounds like the Very Stable Genius we all know!

Fortunately, with a clueless narcissist like Rump, avoiding Mueller's "perjury trap" should be all but impossible.

Give him enough rope and he'll hang himself.

We can only hope, donnah!

For sure. He always goes off script.

If Trump were a centipede, he'd still be running out of feet to shoot himself in. It sounds like he's revving up to give Mueller a bit of a chiding about how silly it is to talk about obstruction of justice when all he's doing is fighting back. No doubt Mueller will see the light and just drop the whole thing.

Which caused his team of legal beagles to, once again, plotz:

I imagine by now they're used to plotzing frequently.

Infidel - they might as well remain prone to avoid possible injury to themselves...

Dotard 45's legal team were heard groaning loudly "Oh GOD No!
It has been said when you represent yourself in a court of law ... you have a "fool" as your attorney!
THAT pretty much sums up Dotard 45 ...bigly!