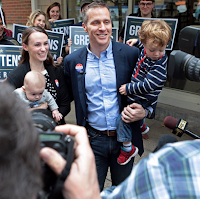 Back in January, we noted the sex and blackmail scandal in which rising Republican reprobate Gov. Eric Greitens of Missouri was embroiled.  Today, it became very real for the tea baggin', Trump- supporting guv:


A St. Louis Grand Jury has indicted Missouri Governor Eric Greitens for Felony Invasion of Privacy. The charge stems from his extramarital affair with a Missouri woman who later told her ex-husband that Greitens tied her up and photographed her, without her permission, and threatened to release the photo if she ever came forward about their relationship.


The FBI is reportedly investigating the blackmail allegation made by Greitens' former mistress, with whom the married governor was having an affair before he was elected by the fine mouth- breathers of Missouri.