The Plutocrats' Latest Assault On Labor 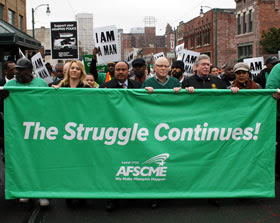 Tomorrow, the rightist Supreme Court is schedule to hear oral arguments in Janus v. American Federation of State, County and Municipal Employees (AFSCME) over whether public unions can collect union dues / fees from employees who do not wish to join the union, despite the fact that they benefit from union collective bargaining for better wages and benefits. The Janus side is heavily bankrolled by far-right plutocrats Charles and David Koch, and the Bradley Foundation, among others, who have been engaged in union-busting for decades, pushing such policies as "right to work (for less) laws", so as to weaken labor's role in standing up to their corporate greed.

While the suit aims at AFSCME, it also means to undermine one of the Democratic Party's grass roots strengths in fundraising, canvassing and getting out the vote: public unions.


"The idea that draining power from unions can enervate other progressive movements is not an idle one. A recent study from the National Bureau of Economic Research found that right-to-work laws that limit unions at state level, in much the same way that the Janus lawsuit would do nationally, have suppressed the Democratic party’s share of the presidential vote by 3.5%"

The ripple effect on the labor movement by ruling in favor of the plutocrats regarding public unions can't be understated: public unions count for roughly half of all organized labor.


"What is at stake is 'more than just the ability to collect dues,' says Sarita Gupta, executive director of Jobs with Justice, a coalition group that is helping organize the mobilization. An adverse ruling would 'fundamentally weaken the institutions of labor … one of the most organized and successful institutions that represents working people in our economy and our democracy.'”

The rightist Supreme Court has invariably sided with corporate interests since it's had a Rethuglican majority, and it's expected to rule in June against public labor unions. All the more reason that progressives in this country need to organize, mobilize and vote to make sure that not only Congress is flipped, along with the White (Supremacist) House, but that new vacancies on the Court are filled by progressives.
Posted by Hackwhackers at 1:00 PM

When the plutocrats & theocrats get a divorce, who will get custody of America?