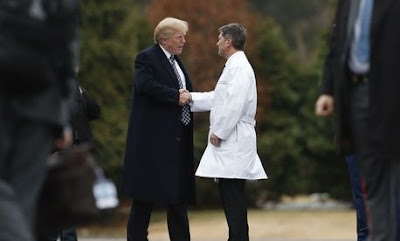 When he stepped to the White (Supremacist) House podium earlier this year to absurdly proclaim demagogue and shady con man Donald "Rump" Trump the picture of excellent health, physician Rear Adm. Ronny "Fears Donny" Jackson looked nervous, unsteady and scripted. Under questioning by the press, he defended Rump's unhealthy lifestyle that mixes cheeseburgers, fried chicken and golf carts, explaining that some people "have great genes." When he announced that Rump's weight was 239 pounds, chuckling was heard in the audience (239 pounds is coincidentally one pound under the definition of "obese" for someone of Rump's height). He apparently did so well in dissembling about Rump's health problems that his loyalty was rewarded with a nomination to be the new Secretary of Veterans Affairs.

Lacking any management experience that would be needed in managing the nation's second largest Federal department, Dr. Jackson's nomination was already on thin ice before yesterday's late breaking news of allegations regarding his conduct as White House physician. While details have yet to emerge, initial reports indicate that Jackson created a "hostile work environment," and improperly dispensed medications. That forced the Senate to indefinitely postpone his nomination hearing.

Don't expect Rump to go to bat for his hapless nominee, who may withdraw before he's rejected by the Senate. He did Rump's bidding, Rump returned the favor, but there are limits to Rump's "loyalty" as we know so well.

UPDATE: The wheels on the bus go 'round and 'round...look out Ronny! Rump's throwing you:


“I told Admiral Jackson just a little while ago, I said, ‘What do you need this for? This is a vicious group of people that malign. [snip] If I were him, actually in many ways I’d love to be him, but the fact is I wouldn’t do it. I wouldn’t do it. What does he need it for?”

(photo:  "You know you're giving me an excellent health report, right Dr. Jackson?" Carolyn Kaster/AP)
Posted by Hackwhackers at 8:45 AM

Hopefully sanity will prevail and Jackson, the suckup, will be denied the position for which he is completely unqualified. Trump can then say he is a good man, but the obstructionist, partisan committee ruined his chances. Same old, same old, but better to dump him now than have him be the next Carson or Pruitt.