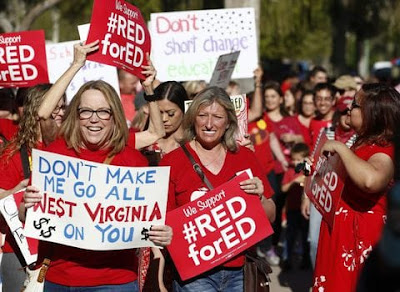 It's been one of the insidious missions of the Rethuglican / New Confederate / Stupid / Shooters Party to eviscerate public teachers unions, not only to curtail public education which is supported by taxes, but to undermine their political clout as part of the Democratic coalition. We've seen recently where Rethuglican-controlled state legislatures in West Virginia, Oklahoma and Arizona have stonewalled public school teachers on pay raises, which in many cases would simply catch teachers up to the cost-of-living over the past decade. There are stories of countless teachers who have reached into their own pockets to pay for school supplies that their schools should have been buying, but can't due to local right-wing pressure on taxes.

In a poll released today by the Associated Press/NORC Center for Public Affairs Research, fully 78% think that the average school salary is too low, with only 6% (ed.: Sixth grade dropouts?) thinking that public school teachers are paid too much. Fifty percent of Americans would be willing to pay more in taxes to provide a pay increase to teachers, and 52% approve of teachers leaving the classroom to strike.

This poll presents a serious problem for Rethuglican politicians, who have been trying mightily to destroy public teachers unions, as well as all public sector unions. They're on the wrong side of public opinion, and as they fight to deny fair pay to teachers, that public should punish them from the school board level to the legislatures and governorships at the ballot box.

Well, Trump did say he loves the poorly educated, and the Republicans are trying to create more and more of them.

If anyone deserves more pay and respect, it's teachers. That's one hell of a difficult job to do well, and essential to the whole country's future.

Infidel -- The Republicans have a vested interest in a dumbed-down population that they can convince to vote against their own interests. The societal values that allow teachers to have to scrape by, while con men in business and religious hucksters rake in millions, is obscene.