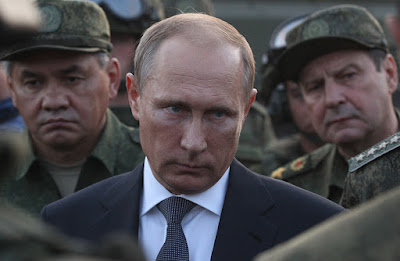 The governments of the Netherlands and Australia said today that they hold thug Vladimir Putin's Russia culpable for the downing of Malaysian Airlines Flight 17 over Ukraine in 2014. The shoot down killed all 298 passengers aboard, including 193 Dutch and 28 Australian citizens. Both governments plan to seek damages in international court. It's unclear whether the 8 other nations that lost citizens in the attack will join in the case.

The doomed flight's path took it over eastern Ukraine, which had been invaded by unmarked units of the Russian Army. A Russian anti-aircraft unit fired a Buk missile which brought the passenger airline down. Not surprisingly, Russia has denied responsibility for the attack, despite photographic and physical evidence to the contrary, including a segment of the damaged Russian missile.

For years, Putin has sought to incorporate Ukraine, in whole or in part, in his version of the former Soviet Union. His invasion of Crimea, and his belligerence toward former Soviet states like Georgia and the Baltic states flow from his expansionist vision. He memorably said just two months ago that he'd reverse the collapse of the Soviet Union if he could. His troops' downing of Flight 17 over Ukraine was Putin's way of saying that's Russian territory; it was no accident.