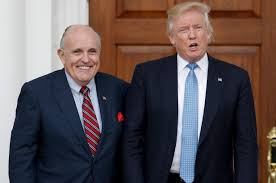 
“It’s going to turn out to be perfectly legal; that money was not campaign money,” Giuliani, who joined Trump’s legal team last month to handle issues related to special counsel Robert Mueller’s Russia investigation, told Fox News’ Sean Hannity Wednesday night in an attempt to argue that the payment wasn’t a campaign finance violation. The payment was “funneled through a law firm, and then the president repaid it.”

“Sorry, I’m giving you a fact now that you don’t know,” Giuliani continued. He told The New York Times that a monthly $35,000 reimbursement scheme was set up, coming out of a personal Trump family account. Trump ended up paying Cohen $460,000 to $470,000 in total, including funds for “incidental expenses,” he said.

As far as campaign finance laws, legal eagle Giuliani might not be totally up on the law:


... How the payment was made doesn’t affect the legality.

There was still almost certainly a campaign finance violation.

“We still have the same question: What was the purpose of this,” Noble said when we spoke by phone Wednesday evening. We’ve noted in the past that the question of whether the payment was meant to aid Trump’s candidacy is central to campaign finance considerations — and that it’s hard to argue that this payment wasn’t related to the campaign.

Another observer points out that the manner in which the payments were made, according to legal eagle Giuliani, may put Rump's ample ass in even more hot water:


To reiterate, RudyG said the Cohen payment to Stormy Daniels was reimbursed by Trump, through a bank, in installments. That is structuring. That is bank fraud. That is a felony. That is what put former Speaker Hastert in jail.
— Gregg Levine (@GreggJLevine) May 3, 2018


Giuliani claims Rump was informed and on board with the revelations that could end up damaging his cosmically ignorant client in even more ways. Sounds about right. Thanks, Giuliani!

This is obvious, but still should be said: Giuliani’s reveal that Trump repaid Cohen $130,000 for hush money to Stormy Daniels renders the repeated denials to the American people from POTUS and his press secretary false and untrue.
— Philip Rucker (@PhilipRucker) May 3, 2018


But, Michelle Wolf was harsh.

UPDATE:  Continuing to dig a hole for his dimwit client, legal eagle Giuliani was on Rump's council of advisers show "Fox & Friends" this morning:

Admission (self-goal) by #Giuliani on Fox and Friends connecting Stormy Daniels payment to the election-campaign:

Then says Cohen did what he needed to do to make it go away pic.twitter.com/ZMApG8S0ZC
— Ryan Goodman (@rgoodlaw) May 3, 2018

In our current diseased political environment, I no longer believe that anything will be pinned on Trump, but if nothing else, Giuliani has shown that Trump lied to the American public when he stood on Air Force One and claimed he knew nothing about paying off Stormy Daniels. And that is undeniable, which should be added to the pile of evidence Mueller has.

I'm sure the Trump faithful will twist this to make believe Trump is an innocent victim in all of this. It seems impossible to make anything stick, but I'm hopeful that in the end, Trump will go down in flames.

donnah - we're momentarily surprised to see some of Rump's most fervent ass- lickers taken aback by Rudy's admission (Laura Ingraham and Ken Cuccinelli among them). It will take them a few moments to get the new talking points from Trump world, but it's at least fun to see some of them knocked off message. We remain fortunate that this crowd is as stupid as they are corrupt; that's what might be the only saving grace.

Yeah, as with every utterance from Trump's pie-hole and his “legal representative” list of clowns, it seems there might be some traction for getting Trump convicted. And his loyal fans are scrambling while Avenatti sits and smiles. They're doing his job for him.

It won't matter to trump's base if he lied or not because Hillary and Obama have done much worse!

Anon -- Such is their delusion.