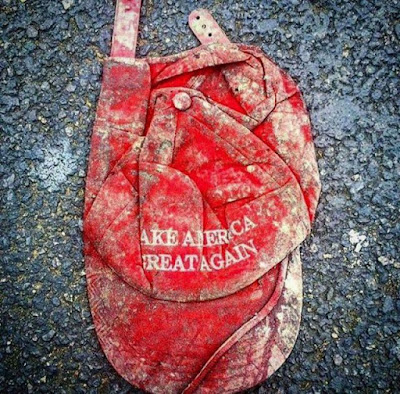 More and more Trumpers are wondering whether they made the right choice in voting for bigot and sociopath Donald "Rump" Trump now that his immigration policies are hitting them in their wallets, rather than those of the brown people they despise. In a story from deep red Kentucky, businesses that rely on seasonal foreign labor are finding devastating labor shortages due to Rump's bigoted  guest worker H-2B restrictions:


“'We live and die by these visas,' said Ken Monin, owner of Monin Construction, which specializes in home additions, roofs, decks and garages. 'Last year we about went bankrupt. The workers we were supposed to get in March didn’t show up until August because they couldn’t get visas.'"

Another Rump con victim spoke about the impact Rump's xenophobic policies have had on his landscaping business:


"Eddie Devine said he believed Trump’s America-first promises. But cutting off a good supply of seasonal foreign labor when Americans won’t take those jobs is only hurting American business owners and the U.S. workers they employ, he said.

These workers aren’t immigrants, and there is no path to U.S. citizenship. When their seasonal work is done, they return home. That’s why Devine thinks the Trump administration’s stifling of guest-worker programs has more to do with racism than economics. 'I think there’s a war on brown people,' he said. [snip] 'I feel like I’ve been tricked by the devil,' said Devine...'I feel so stupid.'”

The kicker is that some are finally seeing a double standard when it comes to them and Rump (and that's not even including his trickle down, billions for billionaires tax cut):


"But what makes him most angry is that Trump’s properties in Florida and New York have used 144 H-2B workers since 2016. 'I want to know why it’s OK for him to get his workers, but supporters like me don’t get theirs,' Devine said."

Why Eddie? Because you and your cohort should have noticed that Rump's NEVER given a good goddam about people like you. He's all about himself and the joy of the con, before he moves on to the next one. You don't need to be a graduate of Trump University to see that.

I am so happy these trump voters are hurting. Maybe they can hire the midwest farmers after they lose their land. I feel nothing but contempt for them. I guess the next big wave will be the disgruntled trump voters picking up their guns and shooting us.

Anon. -- We lack sympathy for them, too. They failed in their duty to be good, informed citizens. Many have moral and ethical failings similar to Trump, and they glory in it. They made their bed, and they can lie in it.