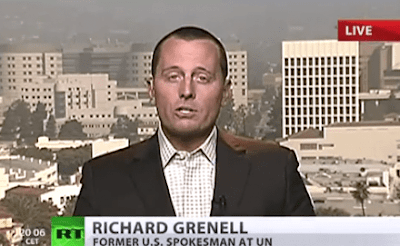 Neo-fascist Putin protege Donald "Rump" Trump has done everything he can to isolate the U.S. from its international allies, while pleasing the Kremlin. He's pulled out of the Paris climate accords, he's withdrawn from the Trans Pacific Partnership, he's broken the multi-national agreement with Iran on nuclear weapons, and he's questioned whether the U.S. would come to the aid of NATO allies if they're attacked.

It appears that he's modeling his diplomatic representatives in his own image. On the first day on the job, the new ambassador to Germany, Richard Grenell had this threatening tweet:


“It’s not up to me to teach the U.S. ambassador how to be diplomatic, but he does seem to need a bit of tutoring,” said Andrea Nahles, the leader of Germany’s Social Democratic Party, according to German broadcaster Deutsche Welle.

Wolfgang Ischinger, chairman of the Munich Security Conference and a former German ambassador to the U.S., tweeted: “Ric, my advice, after a long ambassadorial career: explain your own country’s policies and lobby the host country — but never tell the host country what to do, if you want to stay out of trouble. Germans are eager to listen, but they will resent instructions.”

Grenell, a former Fux News commentator who also worked for neocon nutjob John "Nuts And" Bolton and plutocrat Willard "Mittens" Romney, also has a record of misogynistic comments. He apparently thinks his Trumpist bullying manner will get the Germans to click their heels and follow orders, but they've been there and done that.

Trump seems to think that other countries can simply be bullied and ordered around -- even, evidently, when the country in question is the world's fourth-largest economy.

He's been criticized for leaving so many ambassadorships vacant, but if this is what happens when he fills them, that may have been a mercy.

Infidel -- His narcissistic personality causes him to pick appointees who are as crass and arrogant as he is, with the key additional qualification that they be blindly loyal.