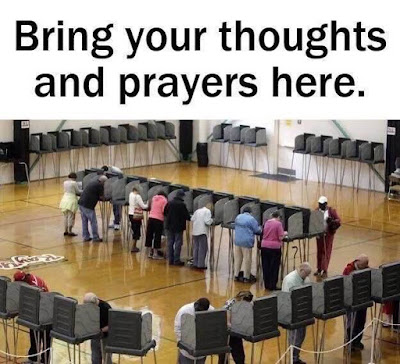 The gun violence that we've seen just this year in massacres in Parkland, Florida and last Friday in Santa Fe, Texas, has mobilized a generation of potential voters. The school massacres are nothing new: Columbine, Virginia Tech, Sandy Hook. It was after the murder of 20 small children at Sandy Hook that Americans were certain that the gun lobby would back off of its absolutist, insane resistance to gun safety measures. Didn't happen, thanks to corrupt and amoral politicians (i.e., Rethuglicans) in the back pocket of the National Rifle Rampage Association, who kept up the "now's not the time" mantra.

There is heartening evidence that the gun safety will be the single issue for new voters (see Charles Blow link below). One hundred thousand California teens (and counting) have registered to vote in the aftermath of the Parkland massacre. Today, all New York City high schools are sponsoring "voter registration day", potentially registering 110,000 new voters. Not all is positive news: teen registration in some states is lagging, ironically in Florida of all places.

There are resources available to answer questions that teens would have about where, when and how to register. Here's one. Here's another.  Remember, those coin-operated Rethuglicans respond to the fear of losing their pathetic careers. Talk to your teen, ask them to spread the word. Make it happen where you live.

Labels: Voter registration among teens in wake of school shootings