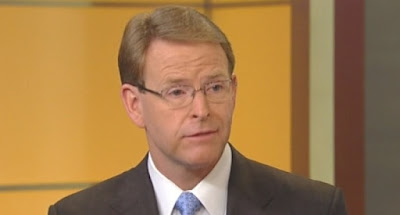 We're familiar with the habit of vindictive Rethuglicans putting foxes in chicken coops to "guard" them: for example, polluter and big spender Scott "Screw It" Pruitt at EPA, national park despoiler Ryan "Dinky" Zinke at Interior, and corporate education advocate Betsy DeVos at Education. It's their way of flipping the finger to progressives and feeding their rabid base some red meat by undermining President Obama's legacy.

This isn't a big appointment in comparison to those, but it's another slap at the purpose of an organization by appointing someone to an organization who shares none of its goals. Partisan right-wing Bible huckster and massive homophobe Tony "Full of Baloney" Perkins was named to the U.S. Commission on International Religious Freedom by human / turtle hybrid and amoral crapsack Sen. Mitch "Missy" McConnell.  The purpose of the organization is "defending...freedom of religion or belief abroad." Perkins' appointment won't do that, but it will give him a platform for denouncing LGBQT communities at every opportunity. GLAAD composed a list of Perkins' offenses against their community:


"Among the more than 30 examples listed are a comparison of same-sex marriage to a marriage between 'a man and his horse'; the labeling of the 'It Gets Better' project, a popular initiative designed to help LGBTQ young people cope with bullying and marginalization, 'disgusting' and a 'concerted effort'  to recruit kids into the gay 'lifestyle'; and claiming the 'blood' of 'young marines' would be on the hands of lawmakers who vote repeal the military’s 'don’t ask, don’t tell' policy."

As someone who has a blindspot for Rethuglican sinners, Perkins has supported nihilist and serial sexual abuser Donald "Rump" Trump, giving him a "mulligan" that he would instantly deny any Dem  or progressive. Perkins' appointment is yet another indication of the moral bankruptcy of Rethuglicans.

Posted by Hackwhackers at 4:15 PM

This administration is sparing no effort to make it clear that only heterosexual Christians are "real Americans". Every new appointment is like the outcome of some kind of party game where the object is to think of the worst possible person to place in that particular post.

I saw some of the videos in the "It Gets Better" project. Wonderful work, which may well have helped any number of young people draw back from suicide. Of course Perkins is on the side of the bullies and marginalizers.

He's right about the danger of gays in the military, though. That's why the Spartans, the Romans, and the armies of Alexander the Great never won any battles.

Grrr, I'll stop here. This is not good for my blood pressure. Hurry up, Mueller.

Infidel -- He's a cold, despicable charlatan. His religious "business model" depends on hatred and oppression of people different from him. Here's hoping his world crashes and burns.