The NFL And Patriotism


Progressive star, Afghan war veteran and former Missouri Secretary of State Jason Kander had some thoughts last fall -- which he retweeted today --  as more and more NFL players knelt during the national anthem to draw attention to the epidemic of police shootings of unarmed African-Americans:

Patriotism isn't about making everyone stand and salute the flag.

Patriotism is about making this a country where everyone wants to.
— Jason Kander (@JasonKander) September 24, 2017


Apparently bullied by demagogue Donald "Rump" Trump (a.k.a. draft-dodging Cadet Bone Spurs), today's decision by NFL team owners to penalize teams for not standing will undoubtedly be challenged as a violation of the players' free speech protections. But what a disgrace that these plutocratic owners don't understand what Kander does -- and what he fought for.

BONUS: Friend Feline Mama points us to a former NFL player who has his comment on the NFL's hypocrisy.

BONUS II: Friend Diva notes that Jets owner Christopher Johnson has offered to pay fines associated with his players kneeling. Respect for the First Amendment still flickers in the NFL. 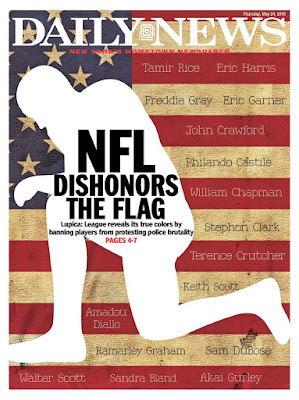 Another quote coming from former NFL QB, Sage Rosenfels : "Forced patriotism is the opposite of freedom". Good post (Rawstory)

F.M. -- Thanks for pointing us there!

Jets owner will pay the fine for any player who wants to kneel.

Diva -- Hopefully his decent action will inspire some other owners. Not holding our breath.