The Wheels On The Bus Go 'Round And 'Round 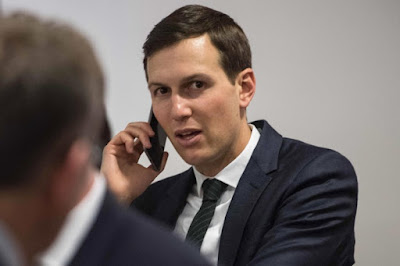 A Vanity Fair reporter who's well sourced in Trumpworld, Emily Jane Fox, said this morning on Morning Blow that, based on her reporting for her upcoming book, "Born Trump," multiple sources familiar with sociopathic liar Donald "Rump" Trump say he'd throw son-in-law Jared "Mr. Ivanka" Trump under the bus if it what was necessary to save Rump:


“I have talked to a handful of people, especially in reporting the book and for Vanity Fair, who are close to the president, who have been close to him for years, who said if it comes down to it, there’s no question that Jared is going to be thrown under the bus. If the president is presented with a choice of saving himself or his son-in-law, Jared is out before you can say Jared.” (emphasis added)

Kushner was assigned a ridiculous number of  major "jobs" in the White (Supremacist) House by a jealous Rump, probably to set him up for his eventual failure ("See Ivanka, daddy's a better man."). He was also identified as attempting to set up a back channel to the Kremlin with indicted felon Michael Flynn and former Russian Ambassador Sergey Kislyak. Those conversations apparently led to Kushner meeting with the CEO of a sanctioned Russian bank, Sergey Gorkov,

Now that Flynn is cooperating with Special Counsel Mueller, he likely has substantial information compromising Kushner, and the Rump legal team -- such as it is -- probably knows it. Kushner does, too.

Labels: Emily Jane Fox, Trump will throw Kushner under the bus if necessary