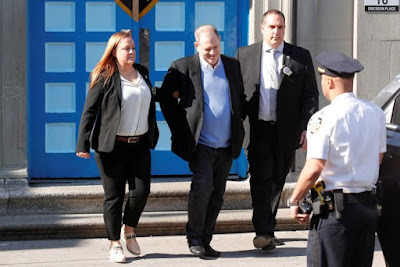 Earlier this morning, former movie mogul Harvey Weinstein was led away in handcuffs by New York City police detectives after surrendering at a precinct station. He's been charged with rape and sex abuse by two women. Weinstein was later released by a Manhattan Criminal Court judge on $1 million bail, and will have to wear an ankle monitor.

Allegations by dozens and dozens of women against Weinstein for years of offenses ranging from fondling to rape started the #MeToo movement that exposed powerful men in all walks of life for sexual abuse. For years, many powerful men have used their positions to humiliate and coerce women sexually, assuming that the women would stay silent. They thought their power would let them get away with it. No more.

(photo: Mike Segar, Reuters)
Posted by Hackwhackers at 10:30 AM