What If They Made A Coin And No One Came? 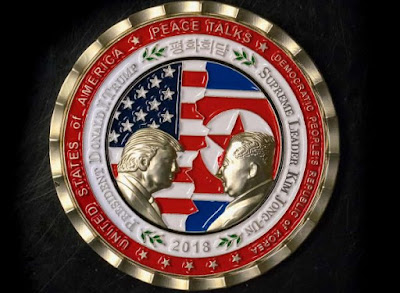 This coin is so wrong on many levels. One,  desperate demagogue Donald "Rump" Trump's coin is depicting the U.S. on an equal basis with the murderous North Korean regime and Kim Jong-Un (not that Rump doesn't have dictatorial desires) simply to ingratiate himself with Kim. Two, it's wildly premature. The June meeting itself appears to be in trouble, with Rump having misread Kim (and definitely out-manuevered by him). Three, what kind of self-aggrandizing, raging narcissistic sociopath would do this? Rump, of course, who is so desperate for a "win" at any cost, and who imagines himself a future Nobel Peace Prize winner (after the Iran deal withdrawal and moving the U.S. embassy to Jerusalem? Ha.).

Today's relatively brief meeting between South Korean President Moon Jae-In and Rump ended with them saying that the meeting may be delayed, with Rump suggesting that Chinese President Xi Jinping was behind the delay. It can't be that Rump gave Kim much of what he wanted in agreeing to meet in the first place, with Kim figuring he had his eager mark where he wanted him.

If this coin is a symbol of anything, it's a symbol of Rump's delusional belief that, as the world's smartest man, he can quickly wrap up a deal that has eluded several Presidents before him, and that what's really important is not the deal itself, but the show.
Posted by Hackwhackers at 3:30 PM

Labels: Donald Trump's narcissism, Trump and Moon meet in White House, Trump has coin made for the talks with North Korea

Valuable un-circulated challenge coins - what is the market for those and has Chump just cornered it? P.E.C.

Made in China probably