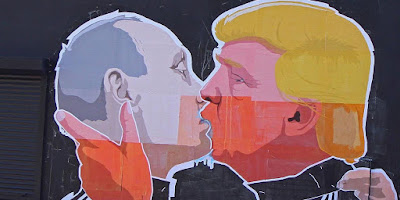 With a summit between Russian autocratic thug Vladimir Putin and his pawn, corrupt neo-fascist and treasonous buffoon Donald "Rump" Trump in the offing next month, it's worth considering just how much Rump could concede to his idol and confidante. If it were a performance review, Rump would get high marks from Putin for any number of Russia-friendly actions: Rump's attacks on our longtime allies in the G7 and NATO, his degradation of America's image through his embrace of murderous North Korean dictator Kim Jong Un and his ugly treatment of immigrant families crossing the southern border, and imposing tariffs on our trading partners who may now be looking to Russia as a new free trade partner. From Politico:


"Trump has made clear that he is eager for warmer relations with Russia — and as long as president’s mercurial nature continues to upend the global order and open doors for Moscow, Putin will be more than happy for Trump to simply continue being Trump.

Putin’s agenda for the potential summit is clear, according to experts. For Putin, the best outcome of the summit is a tacit — or even explicit — endorsement from the American president on par with the praise Trump heaped on North Korean dictator Kim Jong Un after this month’s summit in Singapore.

Such global recognition could help Putin toward some of his longer-term goals, including the recognition that Russia was right to annex a portion of Ukraine in 2014, a commitment to respect Syrian President Bashar al-Assad’s continued rule in Syria, or even a pledge to end the expansion of NATO, the North American-European military alliance that serves as a counterweight to Russian aggression.

And Trump has already endorsed another long-term Putin goal — readmission into the G-7 — a group of major world economic powers that banished Russia over its intervention in Ukraine."

Rump's malignant narcissism and addiction to images that flatter him will cause him to promise nearly everything to Putin in order to emerge with a photo-op that diverts from the story that he's given away the store to an adversary....again. Putin knows this, and knows how to pull Rump's strings, and he won't even have to threaten to cut off Russia's money spigot to Rump's enterprises.