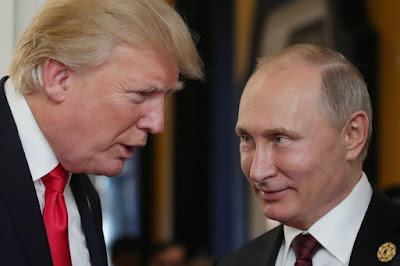 Today marks the two-year anniversary of Kremlin asset and conspirator Donald "Rump" Trump's public request "Russia, if you're listening, I hope you're able to find the 30,000 e-mails that are missing." Apparently, they were listening, because later that day, Russia's military intelligence service launched its first cyber attack on Hillary Clinton's server, as explained in Special Counsel Mueller's July 13 indictment of 12 Russian intelligence officials.

A campaign, #collusionday, has been mounted to demand that Rethuglicans pass legislation protecting Mueller's investigation as it heats up and approaches Rump and his corrupt family and inner circle.  While the chances that Rethugs in Congress will do that are almost nil, they need to be on the record for posterity as siding with a foreign adversary and their asset in the White (Supremacist) House over their country.

Rump will be pulling out all the stops in undermining and obstructing the investigation as it becomes an existential threat to him by exposing his treasonous ties to Moscow. We need to pull out all the stops -- even the long shots -- to resist his efforts.

BONUS:  Oliver Willis has a quick summary of the changing Rump position on collusion with Russia:

met with russians over adoption

met with russians for election dirt but thats ok

met w russians but did not collude