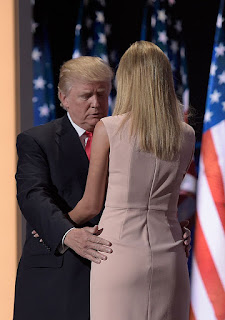 After months of tepid sales and controversy over her foreign sweatshop-made clothing and accessories, First Shady and object of her father's lust Ivanka "Complicit" Trump announced that she is shutting her "fashion" brand. While the reason given by her company's spokesliar was limitations from ethics rules placed on her (when has that stopped a Trump?), it's clear that the business suffered from controversy and boycotts targeting companies that sold her pretentious kitsch.

Early on in her corrupt father's administration, Complicit used her platform in the White (Supremacist) House to hawk her brand, a clear ethical violation. She even had help from Trumpist harpy Kellyanne "Smellyanne" Conway, who was caught telling people to buy Complicit's products on TV.

Now, she can focus on....wait, what the hell is she doing here in the first place?

Ivanka Trump's fashion brand may be over but never forget her timeless fashion advice: Pair sleek, classic nepotism with blind adherence to a maniac and spritz with the vague, insulting guise of female empowerment.
— Louis Virtel (@louisvirtel) July 24, 2018