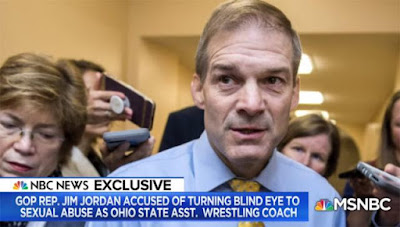 Far-right House "Freedumb Caucus" founder Rep. Jim "Jackass" Jordan now has a seventh accuser come forward to claim that, while Jordan was an assistant wrestling coach at Ohio State, he knew full well about the groping and sexual assaults by a team physician:


"David Range told The Washington Post that Jordan must have know about the alleged sexual abuse by athletic doctor Richard Strauss because it happened regularly and was often discussed.

'Jordan definitely knew that these things were happening — yes, most definitely,' Range told the newspaper. 'It was there. He knew about it because it was an everyday occurrence.'”

Jordan has vehemently, but unconvincingly, denied any knowledge of the sexual abuse, even as more and more of his former team members come forward claiming that he had knowledge of the incidents. One unnamed former wrestling coach who was a colleague of Jordan's called the environment at the time "a cesspool of deviancy."

Jordan, who has pretensions about being Speaker of the House at some future time, recalls an earlier sex scandal involving creepy former Speaker of the House Dennis Hastert (R-Pervland), who was forced from politics after evidence surfaced of his sexual abuse of teen boys while being their wrestling coach more than 30 years ago. Hastert served time in prison and is banned from having unsupervised contact with anyone under 18.

UPDATE:  A formal ethics complaint has now been filed with the Office of Congressional Ethics demanding a probe of the accusations against Jackass.

(photo: May that chyron be attached to him always.)

Jim Jordan is Dennis Hastert is Donald Trump is Every freaking Rape-publican. But, of course rightwingers don't care they are still rallying around Jordan and will do so until he needs to retire due to sudden health crisis or family emergency.

Gene -- The traitorous tribalism on display in this and every other Rethug scandal is obscene. Absolutely nothing -- certainly not "shooting someone in the middle of 5th Avenue" -- will force them to look in the mirror and see themselves as the problem facing this country. Thanks for commenting.

Democrats who are caught in bad situations or scandals are kicked out, and quickly. Republicans immediately go into denial mode, or if that fails, “I don't recall” mode, and finally “leaving to spend more time with family”. They bully and attack their accusers and project their criminal behavior on everyone else.

donnah --That's exactly their operating mode. Trump is exhibit A: serial abuser with very credible accusers, tape of him admitting sexual assault, constant misogyny aimed at humiliating women. It's all there in all of its perverse ugliness all across the Trumpist Party.