Sunday's CBS News Battleground Tracker poll indicates some interest among Rethuglican voters about what the Mueller investigation will find, with some believing that Russian asset and con man Donald "Rump" Trump has done something wrong with regard to the 2016 election and Russia. 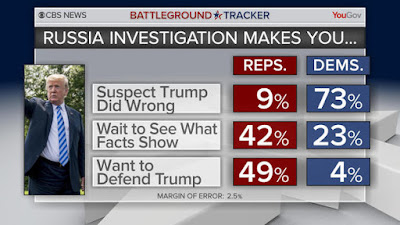 While nearly half of Rethugs say the investigation makes them want to defend Rump, the other half either says "wait and see" what the facts are, or they suspect Rump is guilty of something.

Almost three-quarters of Dems already think he's done something wrong related to the elections and Russia, while nearly a quarter are willing to wait and see the facts in the case. Apparently four percent of Dems are either brain dead or lying about their party registration.
Posted by Hackwhackers at 12:30 PM

Poll numbers like that prove to me that Democrats have to vote in high numbers in November. Republicans are a lost cause, unable to admit that their president is a huge failure and that their political party has destroyed our government. They are the party of cruelty and hate, and Hillary was right, they are deplorable. And she just meant that a few of them were, but I think their party as a whole is deplorable.