Prosecutors Put Pecker In A Wringer* 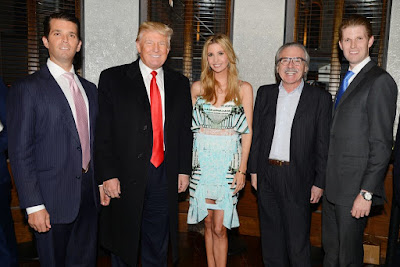 One of sociopath and crime family boss Donald "Rump" Trump's best friends, the appropriately-named tabloid publisher David "It's Really My Name" Pecker is cooperating with Federal prosecutors after receiving a grant of immunity, two media outlets are reporting. Pecker's rag the National Enquirer was involved in the "catch and kill" scheme to silence former Rump mistress and Playmate Karen McDougal prior to the 2016 elections by buying her "story" and then killing it to keep Rump's affair with her secret:


"Pecker 'offered to help deal with negative stories about (Trump’s) relationships with women by, among other things, assisting the campaign in identifying such stories so they could be purchased and their publication avoided,' the court papers say.

Rump and Pecker have been close for years, benefitting from a symbiotic media relationship: Rump would provide Pecker's rags with "exclusive" stories, and Pecker would publish only positive stories about Rump. With Pecker "flipping" -- as Rump would put it in his Mafioso style of speaking -- Rump is running out of allies in his fight with the Southern District of New York's prosecutorial team, which already has his former "fixer" Michael Cohen accepting a plea deal that names Rump as an unindicted co-conspirator in his hush money payoffs to Ms. McDougal and adult film actress Stormy Daniels. With Pecker letting it hang out, there may be more felonious tales to tell to prosecutors about his former friend.

(photo: Pecker, second from right, with the Trump crime family. There's more than one pecker in the picture.)
Posted by Hackwhackers at 4:30 PM

Labels: Publisher friend of Trump agrees to cooperate with Feds regarding Trump's activities

Speaking of peckers, where are Paul and Mitch? Have they appeared anywhere?

Honestly, because I'm immature and also silly, the best headlines on blogs have culminated in the funniest titles ever. Pecker, you're a great laughingstock!

Anon. - What courage they're showing! They're in their hidey-holes waiting for the storm to pass...

donnah -- Has a person ever had a more fitting name? Must have been difficult in high school....

“Trump Claims Pecker Never Worked for Him” is my current fave.

Good one, donnah! I don't think the little blue pill will help him with this problem. P.E.C.