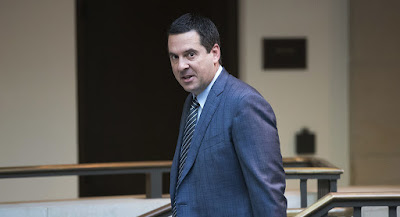 He never stops. Trumpist puppet and Russiagate obstructionist Rep. Devin "Clouseau" Nunes was reported to be in London earlier this month trying to dig up dirt on former British intelligence officer Christopher Steele, who authored the "dossier" on Putin loyalist Donald "Rump" Trump's connections with the Kremlin. According to the report:


"Devin Nunes, a California Republican, was investigating, among other things, Steele’s own service record and whether British authorities had known about his repeated contact with a U.S. Justice Department official named Bruce Ohr. To that end, Nunes requested meetings with the heads of three different British agencies—MI5, MI6, and the Government Communications Headquarters, or GCHQ. (Steele was an MI6 agent until a decade ago, and GCHQ, the United Kingdom’s equivalent of the National Security Agency, was the first foreign-intelligence agency to pick up contacts between Trump associates and Russian agents in 2015, according to The Guardian.)"

Nunes has been an aggressive water-carrier for Rump in his effort to discredit and derail the Special Counsel's investigation into Russia's actions during the 216 election to support Rump's candidacy. He made such a spectacle of himself early in the bogus, partisan House Intelligence Committee "investigation" by coordinating information from the White (Supremacist) House that even spineless Squeaker of the House Paul "Lyin'" Ryan had to temporarily remove him from the investigation. To their credit, British authorities smelled a rat in Nunes, and declined to meet with him in order to smear Steele:


"A U.K. security official, speaking on background, said 'it is normal for U.K. intelligence agencies to have meetings with the chairman and members of the House Permanent Select Committee on Intelligence.' But those meetings did not pan out—Nunes came away meeting only with the U.K.’s deputy national-security adviser, Madeleine Alessandri. The people familiar with his trip told me that officials at MI6, MI5, and GCHQ were wary of entertaining Nunes out of fear that he was 'trying to stir up a controversy.'” (our emphasis)

Stirring up controversy is the least of what this unpatriotic slimeball wants to do: he wants to make sure that Rump never has to come clean about his connections with the Kremlin, and if that means obstructing a legitimate counterintelligence investigation, he's on board.