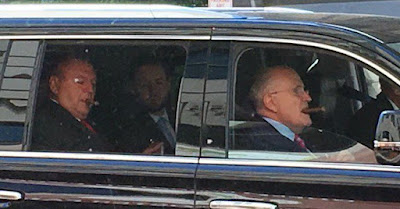 It's said that everything con man and unindicted co-conspirator Donald "Rump" Trump touches dies...or at least gets irreversibly tainted. His TV lawyer, bungling Rudy "Ghouliani" Giuliani has a habit of incriminating his client when on TV (a favorite venue of his while he's seeking to extend his 15 minutes of fame). It also appears that Giuliani's using his position to lobby for foreign governments while acting as Rump's lawyer.

Working a side gig with former FBI Director Louis Freeh's consulting group, Giuliani wrote a harsh letter last week to Romanian President Klaus Iohannis opposing his anti-corruption campaign. (Who'd a thunk Giuliani would be pro-corruption, right? ). The problem is that the sloppy Giuliani failed to note in his letter to the Romanian President that he was writing on behalf of (and getting paid by) Freeh's group, and not representing the views of Rump or the U.S. government. In fact, the State Department supports Iohannis' anti-corruption campaign to weed out corrupt officials and judges.

In a manner similar to his attack on the Mueller investigation, Giuliani targeted Romania's National Anti-Corruption Directorate (DNA) for "excesses" and called for amnesty (surprised he didn't use the word "pardon") to those "prosecuted and convicted through the excesses of the DNA." We suspect he just cut and pasted some of his "legal" musings related to the Mueller probe for this gig. This would be a big ethical problem if the Trumpists had any ethics to begin with.

(photo: Stogie firmly clenched in his yellow rat-like teeth, Giuliani, front seat, is chauffeured away in a limo)

Posted by Hackwhackers at 3:00 PM