Trumpist Duncan Hunter: My Wife's The Guilty One (UPDATED) 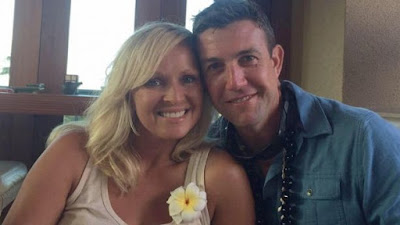 Indicted Trumpist slime ball Rep. Duncan Hunter has lots of class and integrity, like his cult leader, misogynist groper Donald "Rump" Trump. Here he is throwing his wife Margaret under the bus:


"She was also the campaign manager, so whatever she did that'll be looked at too, I'm sure," the California Republican said on Fox News.

"But I didn't do it," Hunter said. "I didn't spend any money illegally."

Hunter, the second Congresscritter to endorse Rump, after Chris Collins who has been charged with securities fraud, was indicted for illegally using $250,000 in campaign contributions to pay for everything from an Italian vacation, to clothing, to flying a pet rabbit across country.

This vile character just oozes cowardice, venality and self-preservation at all costs, just like you-know-who.

UPDATE:  Seems there was some extramarital hanky- panky being indulged in by Hunter, too.  The resemblance to Trump is uncanny. What a guy!

(photo: Hunter with soon-to-be-estranged wife Margaret. Facebook pic)
Posted by Hackwhackers at 9:30 AM

Draining the swamp, indeed! The Hunters are no different than the other grifters who Trump installed: lyong, cheating, stealing as much as they could get their grimy mitts on. And Duncan is slimier still, blaming his wife for the illegal expenditures. They're both as rotten as Trump, and I hope the entire barrel of deplorables gets dumped into prison.

donnah -- There's such a culture of corruption and venality especially among Trumpists, but also the Rethuglican "establishment". Their low regard for the institution of government leads them to grift and to empty the public till as long as they can get away with it behind the front of "drain the swamp."