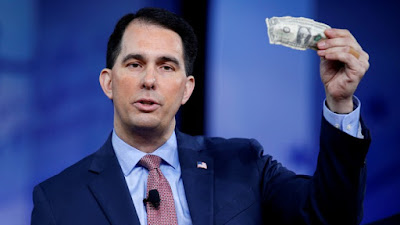 Wisconsin's oleaginous Republican Gov. Scott "Koch Head" Walker, when he's not union busting, has been working cons on his constituents for years, with the assistance of his drooling Republican state legislature. Some chickens are now coming home to roost as he tries to survive another election cycle.

Milwaukee's NPR station reports on the reality of con #1:


When Gov. Scott Walker mounted his first gubernatorial campaign he made a bold claim: that during his first term as governor he would create 250,000 jobs for Wisconsinites. He is just now nearing that figure after nearly two terms on the job.

Most economists believe that governors have a limited impact on how many jobs are created in a given state. That being said, local economist Bruce Thompson believes Walker’s policies may have actually resulted in a loss of 80,000 jobs in Wisconsin.

Have a look at what those reactionary policies are, particularly as they compare to economic development policies in Democratic- governed neighbor Minnesota.

Walker's highly touted initiative to bring Taiwanese tech giant to Wisconsin is also being exposed as a con job. Lawrence Tabak at American Prospect has a deep dive;  here's a snippet:


Industry experts put the employee count for even the original large-scale LCD manufacturing plant at 2,000, just 15 percent of Foxconn's promised workforce. Foxconn’s original plans estimated that three-fourths of its workforce in Wisconsin will be hourly, a pattern that fits the company’s core expertise: assembling iPhones and other electronic devices. For 15 years, Wisconsin taxpayers will be subsidizing Foxconn’s payroll for employees making at least $30,000 to the tune of 17 percent, while capital costs over the first seven years of construction will receive a 15 percent rebate. Should Foxconn hit its capital expenditure and employment targets, Wisconsin taxpayers will end up sending some $3 billion to the company. While state-level support is touted as tax relief, in fact Wisconsin has already waived almost all of the pertinent taxes for businesses. The taxpayer-funded $3 billion in incentives (the largest ever to a foreign company) will be paid largely in cash. The local municipalities are chipping in another $764 million via a tax increment financing (TIF) project so large that the state legislature had to pass a waiver, since this amount far surpasses the statutory prudence level of 12 percent of existing municipal property values. Additional taxpayer-supported costs have put Wisconsin's total outlay at well over $4 billion, more than $300,000 a job. How expensive is this?

As Jeffrey Dorfman, economics professor at the University of Georgia, reported for Forbes in 2017: “Realistically, the payback period for a $100,000 per job deal is not 20 years, not 42 years, but somewhere between hundreds of years and never. At $230,000 [or more] per job, there is no hope of recapturing the state funds spent from taxes on the company and its workers.” Tim Bartik, an economist at the nonpartisan, independent W.E. Upjohn Institute in Kalamazoo, Michigan, who specializes in economic development, concurs: “The per job cost is at least five or six times, maybe seven or eight times, the incentive average.”   (our emphasis)

We're beginning to suspect Walker was a graduate of the dealmaking course at Trump University.  Here's a deal:  let's trade Walker for Democratic nominee Tony Evers.  This is a very winnable race for Democrats, so let's get back to the Wisconsin Idea and away from the Wisconsin Con.

BONUS:  Here's the level of discourse in the Wisconsin Republican Party right now --

The destruction of the environment is going to be massive. You will not be able to drink the water around or downstream from the plant because of the chemical contamination.
Just wait until the American workers see how this company truly operates.

Anon -- hopefully, it won't be too late by then.