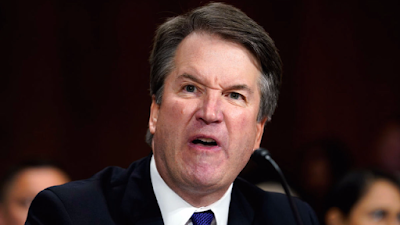 After Dr. Christine Blasey Ford's moving testimony this morning, it was Trump nominee and drunken party assaulter Brett "KavaNot" Kavanaugh's turn, and he obviously got a pep talk from the White (Supremacist) House to throw his elbows. He was at times blubbering, aggressive, petulant, confrontational, rude and self-pitying. He interrupted Dem Senators trying to question him, and turned his head away while they questioned him. He began the hearing with a strikingly partisan statement, blasting Dems on the Committee and everyone from the Clintons to "left-wing organizations" out to "destroy" him. It was a study in nonjudicial temperament, and could serve as a study of someone who needs anger management training. He looked like he was having an emotional breakdown for much of the hearing. Not hard to imagine him being a mean drunk, as his classmates have said.

His belligerance seemed to pump up the cowards on the Rethuglican side, as they dispensed with the female prosecutor and spoke directly to KavaNot. Prominent among the hypocrites was that flower of Southern gentility Sen. Lindsey "Huckleberry" Graham, who was apparently auditioning for AG Jeff Sessions' job. Huckleberry bared his teeth in an impassioned attack on his Dem colleagues, something that was certain to impress his BFF, lying sociopath Donald "Rump" Trump. Dessicated corn stalk Chairman Chuck Grassley spent most of the hearing fumbling around, looking like he forgot his Metamucil this morning. Here are some other reactions to KavaNot's disturbing performance:


weak points for Ford: none


Pretty clear Graham's explosion was tactically a way of cutting off their own prosecutor from askng questions so that GOP senators could ask less probing and accusatory ones.
— Chris Hayes (@chrislhayes) September 27, 2018

"Umpire" no more:Just as Trump doesn't pretend he's president for those beyond his coalition, #Kavanaugh identified more overtly than any recent predecessor as a Justice for only 1 political party & an angry enemy of the other. That will shadow each decision he makes if confirmed
— Ronald Brownstein (@RonBrownstein) September 27, 2018


The Republican position on this is entirely indefensible. There are multiple witnesses who could corroborate or contradict Kavanaugh or any of the women who have sworn he engaged in bad behavior. The committee Republicans have made sure they will not be deposed. Only one reason.
— Norman Ornstein (@NormOrnstein) September 27, 2018

The news, tonight, will have clips of Dr. Ford, very nervously speaking about the trauma she alleges, at times choking up, and clips of Kavanaugh ranting and yelling about Clinton supporters conspiring to take him down and then crying.

Among many other things, this man does not have the temperament to be a Supreme Court justice.
— Topher Spiro (@TopherSpiro) September 27, 2018


BONUS: The American Bar Association is asking the Senate to delay the vote on Kavanaugh until after an FBI investigation is completed.

Posted by Hackwhackers at 8:30 PM

They're holding the vote tomorrow morning.

My bitter and angry prediction. This is another case of us vs them, good vs evil, and the evil has more power. I'm incandescently furious, but there's no more to be done. The die is cast, and we'll have a disgusting, drunken rapist as the new Supreme.

donnah -- We hope you're not right, but fear that you are.