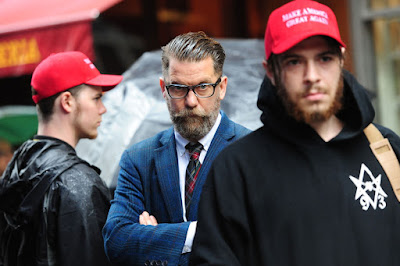 ABC Australia reports that the former leader of the far-right extremist group Proud Boys, Gavin "McOutiss" McInnes, has been denied a visa to enter Australia. Australia cited as its justification for the denial that McInnes was of "bad character." The white supremacy promoter recently left the organization he founded after it was classified by the FBI as an extremist group tied to "white nationalism", i.e. neo-Nazism. Looks like the head rat knows when the ship is sinking.

The so-called Proud Boys are a cowardly collection of misfits, losers and thugs who ambush progressive protesters and others deemed to be enemies of the "white race." Recently in New York City, a group of them brawled with members of Antifa and seven of the group have now been arrested on various assault charges.

(photo: "McOutiss", center, with his red-hatted Stormtrumpers)
Posted by Hackwhackers at 11:30 AM