(We hereby promise ourselves to devote as little attention as possible to this ego- driven putz going forward. He'll be getting more than enough attention from the click bait and corporate media and from Trump/ Republican operatives.) 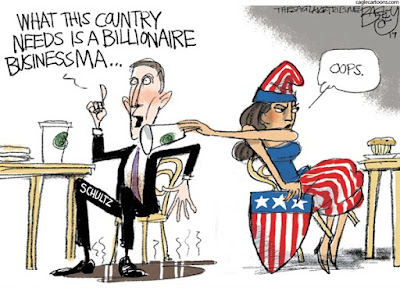 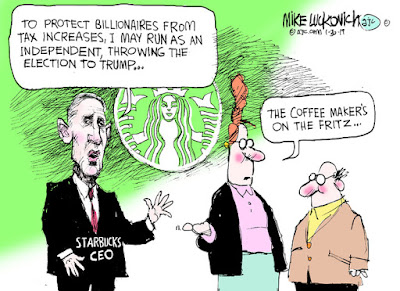 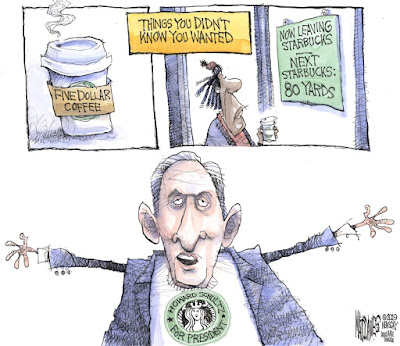 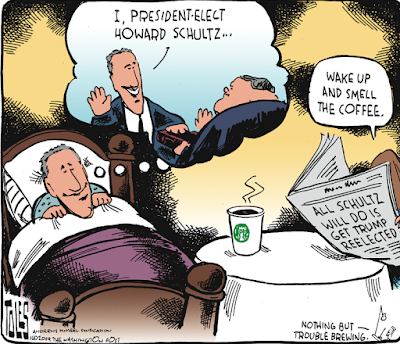 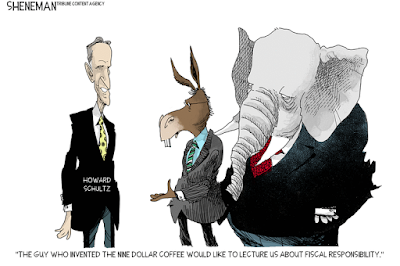 A clueless putz who'll never be ready for prime time:

Howard Schultz says Ronald Reagan is the best Republican prez of the past 50 years, in part because “he never took his jacket off in the Oval Office” due to his respect for the office. pic.twitter.com/UFZtqwYfdt
— (((JonathanWeisman))) (@jonathanweisman) January 30, 2019

Howard Schultz, who did not know how much a box of Cheerios costs, called @elizabethwarren a "socialist" and declared that he does not believe in what the Democratic Party stands for https://t.co/ibLgP9716j
— The Daily Beast (@thedailybeast) January 30, 2019

Those projects were paid for in part by folks paying a top marginal tax rate of 91%.

But he doesn’t want to run as a Democrat because he might have to support a 70% rate so people have healthcare https://t.co/HP2Mv8dbnb
— Franklin Leonard (@franklinleonard) January 30, 2019


Damon Linker has a good read on Schultz, if you want to stoke your anger further.  We're beyond sick of this asshole already.
Posted by W. Hackwhacker at 3:30 PM

Another clueless white billionaire with no governing experience and no idea what middle America is all about? Sign him up! We need more like him: the vain, wealthy, know-it-all/know nothings who arrogantly believe they can fix everything because they made money somehow.

I hope that he's showing himself early enough to be laughed out of the notion. He's shilling a new book, so maybe this is a way for him to promote himself on a “grande” scale. Whatever he thinks, I hope we can make his run short and bitter, just like his coffee.

donnah - our hopes (and expectations), too.