Trump's Devastating Toll On Our Health 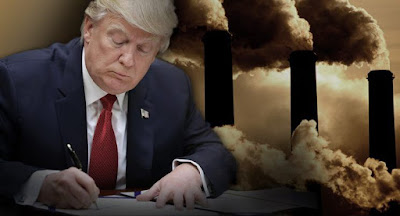 We're becoming more aware every day of Russian asset and sociopathic narcissist Donald "Rump" Trump's destructive impact on people's lives, from his Federal government shutdown and its ripple effects, to the immigrant children separated at the border from their parents and languishing in "detention camp" cages. That's not even taking into account the disastrous, authoritarian impact he's had on the institutions of Government and civil society, ripping up the social compact and treaties, and shredding norms that keeps our society functioning.

Observers of his criminal administration have long noted that his regime serves as the handmaiden of corporate interests and especially predators and polluters. Looking at Rump's harmful impact on the environment that we all share, AP examined 11 major rules impacting fossil fuel industries (and by extension, the environment) and concluded that his policies of relaxing pollution standards would result in increased deaths and social costs, while fossil fuel industries reap billions in profits by taking short cuts on safety and health regulations. Some of the costs to society from their analysis:


— Up to 1,400 additional premature deaths annually due to the pending repeal of a rule to cut coal plant pollution.

— An increase in greenhouse gas emissions by about 1 billion tons (907 million metric tons) from vehicles produced over the next decade — a figure equivalent to annual emissions of almost 200 million vehicles.

— Increased risk of water contamination from a drilling technique known as “fracking.”

Of course, these impacts will be felt most on those least able to mitigate them: the middle and working class. Dr. Michael Greenstone, University of Chicago economics professor and former chief economist for the Council of Economic Advisors under President Obama, sees the Rump regime deliberately downplaying these costs in order to sell them to the public, while they overwhelmingly benefit the corporate predators and polluters:


“When you start fudging the numbers, it’s not that the costs just evaporate into thin air. We will pay. They are reducing the costs for industries where pollution is a byproduct.”

There's much more at the link above that indicates that Americans will suffer from Rump's relaxed pollution and safety regulations on industry giants. If any Trumpists still believe in Rump's "populism," they should (but won't) read and absorb this example of predatory plutocrats running wild under Rump's regime.

Their goals, forever, are to make as much money for corporations and investors as possible, at any risk or cost. It's money, all the time, every generation of these bastards.

So they try to eliminate health care and at the same time, endanger the lives and welfare of the non-wealthy. It's a win-win for them, lose-lose for us. They will take away all of our safety protections and also the remedies for the illness that will result. It's cruel. It's heartless and it's pure greed, plain and simple.

The bottom line is our death.