BREAKING: The Ratf*cker's Day In Court 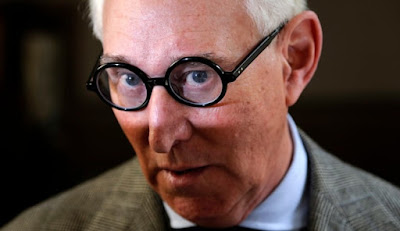 Federal District Judge Amy Berman Jackson has heard the arguments for why degenerate veteran political ratf*cker and Zippy the Pinhead cosplayer Roger Stone should not be penalized in some way for his Instagram post that pictured Judge Jackson with a crosshairs by her head and his suggestions that she couldn't be an impartial judge given her appointment by President Obama. Stone knew exactly what he was doing, only he is used to operating outside the judicial sphere. Big mistake.

Jackson had numerous options, including another warning, a more restrictive gag order, and sending Stone to jail (where, in our opinion, he has always belonged). She decided on a strict gag order, after Stone kowtowed deeply to the Court, that would ban him from speaking publicly about his case. She said that:


"...she didn’t find the former Trump adviser’s defense credible, and that he “couldn’t keep his story straight on the stand” when she allowed him the opportunity to explain his decision to post an image of her on social media with what appeared to be the crosshairs of a gun near her head."

If he'd been tossed in jail for his attempt to tamper with the jury pool, he'd undoubtedly had cast himself as a martyr. Judge Jackson has given him one more chance to shut his vile mouth. We're hoping that he won't.

Stone is an egomaniacal asshat. He broke the conditions of his court order and even lied on the stand today, but for whatever reason, the judge did not throw his sorry ass into jail. I believe he should be confined and literally gagged, but that's apparently not on the table.

Keep talkin', ya big jackass. We all want you in jail.

donnah -- What you said!

I'll walk back my statement, at least partway. I didn't understand why the judge didn't throw his sorry ass into jail, but wiser heads prevailed. By giving Stone more rope, the judge puts all the onus on him to follow her order. Had she responded immediately to put him in jail, he could have cried “abuse of power” or whatever else, and made himself a martyr.

So now he owns the punishment, and for a blabbermouth like Stone, it could be a terrible form of torture. He has to be quiet and if he isn't, then off he goes.

I'm glad there are some smart minds out there with the experience to deal with the likes of Stone.