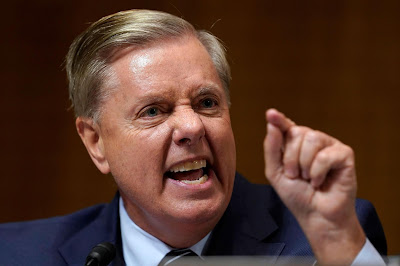 After days of attacks on the late Sen. John McCain by bone spur sufferer and demagogue Donald "Rump" Trump blasting McCain for passing the overwhelmingly accurate Steele dossier to the FBI, it appears from his own admission that Rump kisser and friend-from-hell Sen. Lindsey "Huckleberry" Graham (R-Secession State) was the one urging McCain to do that. So, after allowing his late friend to be singled out for Rump's abuse, Huckleberry finally summons the limited manhood he possesses to confess to his prompting role in the dossier's delivery to the FBI. Someone with direct knowledge of this event must have threatened Huckleberry with exposure unless he came out of the closet clean.

Huckleberry has done a complete 180 on his relationship with Rump, going from someone who called Rump a "kook," "crazy" and "unfit for office" just three years ago, to a dishonest sycophant and lapdog for him, mostly out of fear that Rump's rabid base will turn on him as he faces re-election in 2020. This admission once again exposes Huckleberry as a cynical, hollow opportunist who let his deceased erstwhile friend dangle in the wind as long as it was convenient. Kudos to whomever told Huckleberry to come clean about his role or else.

(photo: Lindsey Graham butching it up for the cameras. REX Shutterstock)