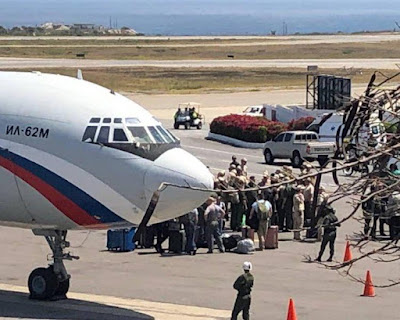 Two Russian military planes with cargo and some 100 troops aboard landed in Caracas, Venezuela on Saturday, according to a report from Reuters. One of the two planes was a cargo aircraft reportedly carrying 30 tons of supplies and equipment. The other plane carried Russia's chief of staff for ground forces and the personnel.  Venezuela's endangered authoritarian leader, Nicholas Maduro, has allied himself with Russia and China in the crisis involving Venezuela's recent elections which apparently ousted him from power.

This most recent Russian attempt to secure a foothold in South America follows their joint military exercises three months ago on Venezuelan soil, including a visit last December by two Russian strategic bombers capable of carrying nuclear weapons. Russia knows it can assert itself in the western hemisphere during this time of demagogue and Russian asset Donald "Rump" Trump's foreign policy weakness and fragmentation of its allies.