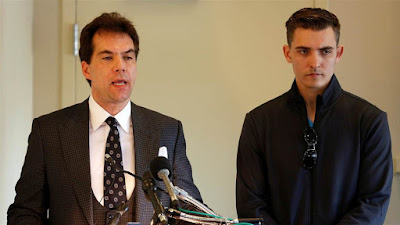 Ratf*cking, the practice of playing dirty tricks on your political opponent, has been in the Rethuglican / New Confederate / Kids-In-Cages Party's DNA for decades, going back at least as far as the sinister crowd that populated the Nixon Administration. Later, it was adopted by such lowlifes as Roger Stone, Lee Atwater, Karl Rove and other Rethug operatives and used in such campaign smears as Bush 41's Willie Horton ad from 1988, the years-long Whitewater/Travelgate hoax against President Clinton, and the slimy Swift Boat attack on John Kerry in 2004.

While con man and sociopath Donald "Not Exonerated" Trump's campaign may have outsourced some ratf*cking to the Russian Federation in 2016, he still has some homegrown help these days. Enter two pieces of human flotsam, Jacob Wohl and Jack Burkman, who concocted a scheme to enlist Rethuglican gays (a self-loathing group if there ever was one) to falsely accuse Dem Presidential candidate Mayor Pete Buttigieg of sexual assault. From the Daily Beast's lengthy article:


"A Republican source told The Daily Beast that lobbyist Jack Burkman and internet troll Jacob Wohl approached him last week to try to convince him to falsely accuse Buttigieg, the mayor of South Bend, Indiana, of engaging him sexually while he was too drunk to consent.

The source who spoke to The Daily Beast said Burkman and Wohl made clear that their goal was to kneecap Buttigieg’s momentum in the 2020 presidential race."

Initially the ratf*cking duo conned a Michigan man to accuse Buttigieg of assault, which later fell apart when the man categorically denied it.

Wohl is currently under investigation by the FBI for making false sexual assault allegations about Special Counsel Robert Mueller through a fake "company" of his. Burkman's main claim to infamy was his role in launching the despicable conspiracy theory about murdered DNC staffer Seth Rich in order to cover for Russia's role in the hacking of documents during the 2016 campaign. It's about time that serious charges were brought against these two gutter dwellers.

(photo: Burkman and Wohl appear in 2018 at disastrous press conference where they attempted to smear Robert Mueller with false accusations of sexual assault)
Posted by Hackwhackers at 9:00 AM

These guys are super-stupid. I mean, they attempt this shit with candidates or opponents every time, and every time they get caught. Put them in jail until they grow some brains.

Who am I kidding? They will never grow brains.

donnah -- They take both stupidity and evil to a whole new level in political ratf*cking, and that's saying a lot for Rethuglicans.