Kobach Pushes Himself For DHS Secretary 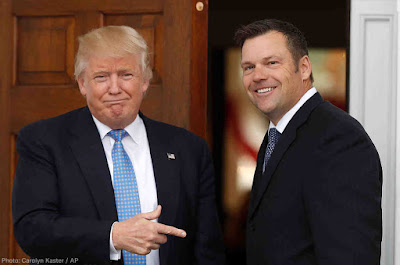 The best way to fluff demagogue and narcissist Donald "Not Exonerated" Trump and to plant something in his weak mind is to appear on one of his favorite Fux Channel programs. With that said, apparently vote suppressor and right-wing white supremacist Kris "KKK" Kobach wants the job as Homeland Security Secretary, after auditioning on Tucker "Mothertucker" Carlson's show last night. He listed actions he'd take tomorrow if he were DHS Secretary, all of them echoing Trump's views (indefinite detention of families, bully Mexico into accepting Central American refugees first, etc.). He sounded like he had the audition script ready and rehearsed. Sadly for Kobach's ambitions, his own Rethug Sen. Pat Roberts (KS) told reporters that Kobach wouldn't be confirmed by the Senate for DHS Secretary. And after all he's done to undermine free and fair elections in order to favor Rethugs!

Kobach's last notable contribution to the Trump regime ended in failure, when his "election integrity" commission failed to get cooperation from most states in his effort to document non-existent voter fraud, all for the purpose of justifying voter suppression measures. It folded after a few months. Kobach, who was once Kansas' secretary of state, lost his bid to be Governor of Kansas when he was defeated by Dem Laura Kelly last November, after trying to out-Trump Trump in his rhetoric and platform. He's the kind of loser that no one else wants that seems to end up in a Trump regime job.

(photo: Trump points to the second most stupid man in the photo)
Posted by Hackwhackers at 3:30 PM