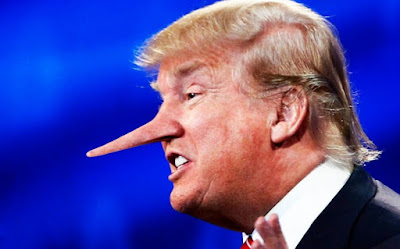 As of April 27, pathological liar and demagogue Donald "Not Exonerated" Trump has lied 10,111 times since his inauguration (828 days), according to fact checkers at the Washington Post. Moreover, it's not just the sheer volume. His pace has increased dramatically lately:


"It took President Trump 601 days to top 5,000 false and misleading claims in The Fact Checker’s database, an average of eight claims a day.

The Post's fact checkers break down some of their findings:


"The president’s constant Twitter barrage also adds to his totals. All told, the president racked up 171 false or misleading claims in just three days, April 25-27. That’s more than he made in any single month in the first five months of his presidency. (our emphasis)

About one-fifth of the president’s claims are about immigration issues, a percentage that has grown since the government shutdown over funding for his promised border wall."


"Trump’s penchant for repeating false claims is demonstrated by the fact that The Fact Checker database has recorded nearly 300 instances when the president has repeated a variation of the same claim at least three times. He also now has earned 21 'Bottomless Pinocchios,' claims that have earned Three or Four Pinocchios and which have been repeated at least 20 times." (our emphasis)

One could dismiss this as "well, all politicians lie." But not like this, not even close. This is truly in the realm of pathology, a mental as well as a deep moral flaw.  And none of it matters one bit to his frothing base.
Posted by Hackwhackers at 9:00 AM