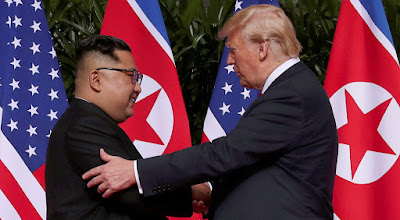 A $2 million invoice for hospital care ransom was authorized to be paid to North Korea by dictator-loving sociopath Donald "Not Exonerated" Trump just prior to the release of college student Otto Warmbier in 2017, according to a report in the Washington Post. Days later after arriving in the U.S. in a coma, Warmbier died after his brutal treatment in a North Korean prison:


"North Korea issued a $2 million bill for the hospital care of comatose American Otto Warmbier, insisting that a U.S. official sign a pledge to pay it before being allowed to fly the University of Virginia student from Pyongyang in 2017.

The presentation of the invoice — not previously disclosed by U.S. or North Korean officials — was extraordinarily brazen even for a regime known for its aggressive tactics.

But the main U.S. envoy sent to retrieve Warmbier signed an agreement to pay the medical bill on instructions passed down from President Trump, according to two people familiar with the situation. They spoke on the condition of anonymity because they were not authorized to discuss the matter publicly." (our emphasis)

As any expert will tell you, once you start paying ransoms, you'll get more hostage taking. Warmbier was sentenced by North Korea to 15 years hard labor for pulling down a propaganda poster in a hotel in Pyongyang in 2016. In the first two years of Trump's regime, Trump has gone from threatening North Korea with "fire and fury" for continuing their ballistic missile tests, to a "we fell in love" relationship (at least from Trump's perspective). Apparently, some of that "love" had to do with the agreement to pay, the type of transaction that Trump is familiar with in his "love" life.

(photo: "Did you get the $2 million I OK'ed? By the way, I love you!" Jonathan Ernst/Reuters)
Posted by Hackwhackers at 4:00 PM