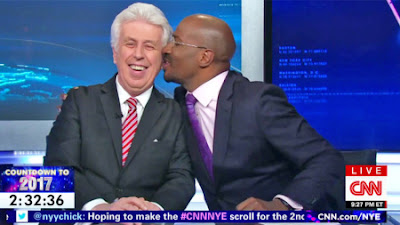 In a revealing interview with Marlow Stern at The Daily Beast, CNN personality Van Jones talks about his various projects, from criminal justice reform to environmentalism to teaching at-risk children to code, in addition to popping up on CNN at every turn. His latest venture for them is to unite victims of crime with the perpetrator in an attempt to provide some ratings-boosting video. But late in the interview, Stern comes back to what many object to in Jones: his disturbing normalizing of sociopath Donald "Not Exonerated" Trump.

The most memorable instance of Jones doing this was his commentary on CNN after Trump's first address to a joint session of Congress, when he declared that Trump "became President in that moment", apparently because he read a prepared text by his speechwriters concerning a fallen Navy SEAL. When Stern asks if he wants to take it back, Jones replies, "No, I'm proud of it." When pressed, Jones becomes prickly, shifting the conversation to his criminal justice reform activism (which he partnered in with Jared "Mr. Ivanka Trump" Kushner no less), at one point saying, "so I'm going to be done with this and talk about something else." He just wants to talk about his "deeds and achievements."

Stern does a good job of pinning a defensive Jones down, at one point getting a telling admission from the CNN pundit:

Stern quickly points out that when Trump does something "right," it could have more to do with a cynical political motivation rather that decency. Jones turns prickly again:


"It turns out that sometimes some politicians do things for political reasons. If we’re gonna freak out about that, then we can’t engage with any politician."

See, it's about access, baby. Engagement. Jones is busy constructing a prominent career at CNN, and with his varied activist enterprises, based on exploiting that.

(photo: Van Jones smooches former CNN hack and Trumpanzee Jeffrey Lord. Can't we all just get along?)
Posted by Hackwhackers at 1:00 PM