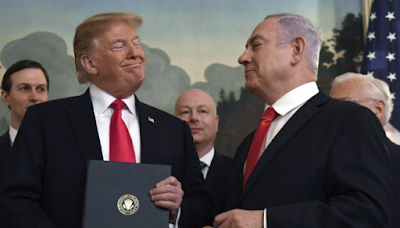 The flop sweat on Bibi Netanyahu (Israel's Trump in every sense) now must be biblical:


In an unprecedented move, Israel will head to elections for a second time in less than six months after Prime Minister Benjamin Netanyahu failed to form a government before a midnight deadline.

The stakes for Bibi involve holding onto power for a particular, very Trumpian reason:


Netanyahu’s Likud is also forwarding legislation that would give Knesset members, including the prime minister, immunity from prosecution, while attempting to roll back the powers of the Supreme Court to overturn Knesset legislation that it deems unconstitutional.

Netanyahu’s pre-indictment hearing for charges in three criminal cases against him is expected in October. He denies the allegations of corruption, bribery and breach of trust. His wife, Sara Netanyahu, agreed to a plea deal on Wednesday in a separate case on the misuse of public funds, Israel’s public broadcaster reported. She agreed to pay a fine of 55,000 shekels ($15,200) it said.  (our emphasis)

The legislation mentioned above (the "Save Bibi's Tuchas Act") is now not going anywhere pending new elections in September.  Then, perhaps, Israelis will end the career of this corrupt and dangerous man.  We might have to wait a little longer to end the career of ours.