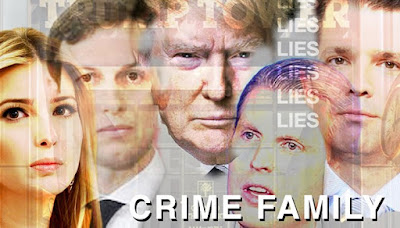 Prominent among the Trump den of thieves and bigots was derelict impersonator and "alt-Right" crusader Steve "Loose Cannon" Bannon. Since being booted from the White "Supremacist" House in 2017, Bannon has been freelancing his toxic stew of nativism and racism in Western Europe and elsewhere. He's also been taking potshots at his former benefactor, sociopath and demagogue Donald "Rump" Trump (a.k.a. Individual-1), the latest being these gems from Michael Wolff's sequel to "Fire and Fury":


"The former White House adviser Steve Bannon has described the Trump Organization as a criminal entity and predicted that investigations into the president’s finances will lead to his political downfall, when he is revealed to be 'not the billionaire he said he was, just another scumbag'. [snip]

The startling remarks are contained in Siege: Trump Under Fire, the author Michael Wolff’s forthcoming account of the second year of the Trump administration. The book, published on 4 June, is a sequel to Fire and Fury: Trump in the White House, which was a bestseller in 2018. The Guardian obtained a copy.

In a key passage, Bannon is reported as saying he believes investigations of Donald Trump’s financial history will provide proof of the underlying criminality of his eponymous company.

Assessing the president’s exposure to various investigations, many seeded by the special counsel Robert Mueller during his investigation of Russian election interference, Wolff writes: 'Trump was vulnerable because for 40 years he had run what increasingly seemed to resemble a semi-criminal enterprise.'

He then quotes Bannon as saying: “I think we can drop the ‘semi’ part.” (our emphasis)

Wolff was relentlessly attacked by the White (Supremacist) House after his last book was released. Expect new charges of "fiction," "fake news," etc. from Trump and his obsequious stooges this time, too.
Posted by Hackwhackers at 3:30 PM