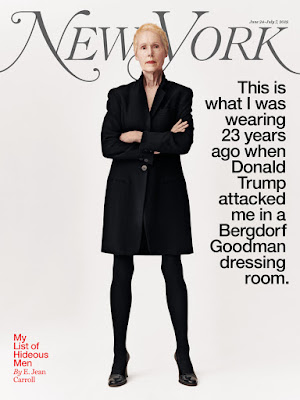 E. Jean Carroll, a well-known advice columnist for Elle and someone who's written for a range of magazines, is stating in a powerful cover story in New York Magazine today that sexual predator and pathological liar Donald "Rump" Trump sexually assaulted her in the mid-90s in a dressing room in Bergdorf Goodman in New York City.

From Carroll's account, Trump was in the department store shopping for an unnamed "girl" and asked  Carroll who was shopping there for advice. The story picks up there, and it's horrific:


"When Trump asks Carroll to advise him on what to buy, she agrees, and the two eventually make their way to the lingerie section. Trump suggests a lace bodysuit and encourages Carroll to try it on; she, deflecting, jokingly suggests that he try it on instead. After they reach the dressing rooms, events turn violent. In Carroll’s account, Trump shoves her against a wall inside a dressing room, pulls down her tights, and, 'forcing his fingers around my private area, thrusts his penis halfway — or completely, I’m not certain — inside me.'” (our emphasis)

Carroll apparently discussed the assault contemporaneously with two friends who are also journalists, one of whom insisted she report the assault to police, and the other warning her that Trump would bring an army of lawyers along and "bury you."  Trump was married to second wife Marla Maples at the time.

The degenerate sociopath that sits in the Oval Office is sure to deny this account, if he responds at all, and his cult followers certainly won't care. But the rest of us know with certainty, as the 16th* victim of sexual assault by Trump who has come forward, that she's telling the absolute truth.\
_________
*Vox counts 21 other victims.

I'm sure I'm not the only one who is saying, "Why now"? Any thoughts?

FM -- She apparently saw what happened to the other 15 who were smeared, attacked and threatened by Trump and his cult, and finally decided it was her turn to step up despite all that. We wonder how many more stories are out there.