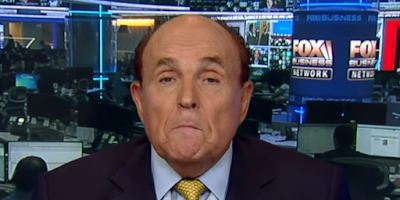 Delusional buffoon and Trump's bootlicking TV lawyer Rudy "Ghouliani" Giuliani is in an acrimonious divorce from his third wife, Judith Nathan (with whom he was having an affair while married to second wife Donna Hanover). One very contentious issue is that Giuliani has been holding out on her as far as his income, in order to deny what's properly owed to her for suffering through a 15 year marriage with him. According to Ms. Nathan's attorney:


“'Not only is he working pro bono for the president, for this individual, but it’s costing him money,' said Bernard Clair, who represents Judith. [snip] When he’s going to work for the president, he bundles, for lack of a better word, clients from his other businesses' to defray these costs, including a recent trip to Warsaw, Poland, Clair said."

Also trips to Ukraine to try to torpedo Robert Mueller and Joe Biden's son Hunter with bogus conspiracy trash. In any event, Giuliani's free legal help to the sick demagogue in the Oval Office seems to be something his client can do without most days. You get what you don't pay for. According to Clair, this free work for Trump is meant to portray himself as less than the wealthy bastard that he is. There's more:


"Clair alleged in court in November that Giuliani cried poor after she served him divorce papers. Not only did he leave a cushy white-shoe law firm gig and start no-fee legal work for Trump, he spent $286,000 on his rumored girlfriend, a New Hampshire hospital administrator named Maria Rosa Ryan, Clair had said." (our emphasis)

We hope that mistress of his takes him for far more than a mere $286,000. Ninety-nine percent of women wouldn't have the horse-toothed clown at any price. Which brings us to his absurd, cheap hair dye job. He went from mousy gray and white to a gawdawful shade of something-the-dog-vomited-after-eating-red-beans-and-a-beef-burrito. It's got to be the kind of dye that kills brain cells, not that he has many left.

(Photo:  Single and ready to mingle?)
Posted by Hackwhackers at 1:00 PM

I liked it better when Rudy was out of the news. He always looks like such a jackass.

And doesn't his new hairdo make him look like one of the munchkins from the Wizard of Oz?

donnah-- When he was "representing" Trump on TV, he always managed to make a mess of it. His hairdo color is ridiculous, thus it fits him to a "t."