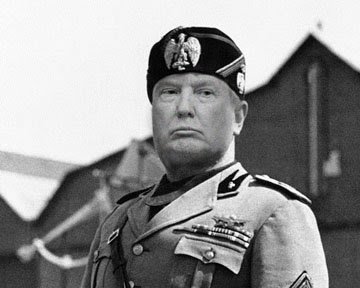 In reading this story about neo-fascist demagogue and mental case Donald "The Chosen One" Trump retweeting a symbol used by white supremacists, we noted this tweet from 2016 that was included in the story:


That Trump echoed the thoughts of Italian Fascist dictator Benito Mussolini (Il Duce), Hitler's WWII ally, shouldn't surprise anyone, since his admiration of dictators is well known. He knows his right-wing, red cap cult longs for an authoritarian leader who will bulldoze democratic institutions and political norms to establish their warped, racist policies. He's happy to oblige.
Posted by Hackwhackers at 10:30 AM