"Invasion" And The Language Of Replacement 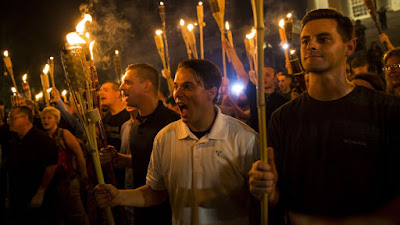 You've heard the chant of the tiki torch-bearing neo-Nazis and KKK rioters in Charlottesville two years ago: "Jews will not replace us," or the more generic "you will not replace us" when facing anti-fascist counter protesters. The chants have meaning to the so-called alt-Right who subscribe to the crackpot notion that black and brown people, people not sharing their Christofascist religious beliefs, etc. are going to "replace" them in the U.S. population. The words "great replacement" and "invasion" appeared in the "manifesto" of the El Paso mass murderer.

The "replacement theory" has been a toxic fixture on the rabid, racist right for a long time, and more openly among Rethuglicans, who use the term "invasion" as a shibboleth for their racist beliefs involving replacement by minorities. From Mother Jones' Jacob Rosenberg:


"A fear of an 'invasion' of people of color has also been a longtime Republican talking point that has gained prominence during the Trump administration. The New York Times analyzed right-wing media—including Fox New shows like Tucker Carlson Tonight—and found 'hundreds of examples of language, ideas, and ideologies that overlapped with the mass killer’s written statement.' President Trump and officials in his administration have used it, and Republican members of Congress have used similar racist language."

In his article, Rosenberg lists 15 Rethuglicans who are inciting the "replacement" fever to appeal to their violent and xenophobic base by employing the "invasion" rhetoric. None are a surprise: Rep. Louie "Screwy" Gohmert, Rep. Steve "Cantaloupe Calves" King, Rep. Paul Gosar, Rep. Mo "Is Less" Brooks, and of course the Inciter-In-Chief and sociopathic demagogue Donald "Send Them Back" Trump (who is married to a probable illegal immigrant who used chain migration to bring her parents to the U.S. from Slovenia).

Ironically, to make the U.S. a vastly better country, it's these depraved racists that need to be "replaced" as soon as possible.
Posted by Hackwhackers at 2:00 PM