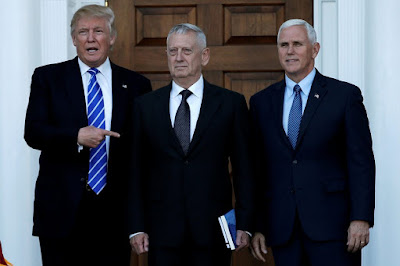 
"On December 19 of last year, Admiral Michael Mullen, the former chairman of the Joint Chiefs of Staff, met James Mattis for lunch at the Pentagon. Mattis was a day away from resigning as Donald Trump’s secretary of defense, but he tends to keep his own counsel, and he did not suggest to Mullen, his friend and former commander, that he was thinking of leaving.

But Mullen did think Mattis appeared unusually afflicted that day. Mattis often seemed burdened in his role. His aides and friends say he found the president to be of limited cognitive ability, and of generally dubious character." (our emphasis)

That's a gentlemanly way of putting it, but it squares with the estimations of former Secretary of State Rex "Rexxon" Tillerson. former Chief of Staff John Kelly, and former National Security Advisor H.R. McMaster, and many others who reportedly disparaged Russian asset and bigoted demagogue Donald "The Chosen One" Trump's mental ability and unfitness. The article continues:


"Mattis had maintained his dignity in perilous moments, even as his fellow Cabinet officials were relinquishing theirs. At a ritualized praise session at the White House in June 2017, as the vice president and other Cabinet members abased themselves before the president, Mattis would offer only this generic—but, given the circumstances, dissident—thought: 'It’s an honor to represent the men and women of the Department of Defense. We are grateful for the sacrifices our people are making in order to strengthen our military, so our diplomats always negotiate from a position of strength.'" (our emphasis)

We recall the nauseating, forced praise by Trump's toadies (VP Pence, and Reince "Prepuce" Priebus, among them) as Trump went around the table of Cabinet members absorbing their worshipful accolades with a smug look on his face. A big question now is whether Mattis will go beyond the gentlemanly, second-hand reports of his displeasure with Trump before the 2020 election. Goldberg concludes the article:


"I thought back to what he’d told me earlier in the summer, when I had asked him to describe something Trump could say or do that would trigger him to launch a frontal attack on the president. He’d demurred, as I had expected. But then he’d issued a caveat: 'There is a period in which I owe my silence. It’s not eternal. It’s not going to be forever.'” (our emphasis)

We're in a national emergency with an unhinged Trump. It's time for senior public servants like Mattis to stow their reservations. Time's running out for "Mad Dog" to go from barking to biting.