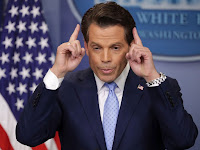 (Ed.: Former Trump sycophant and hedge fund hustler Anthony "Mooch" Scaramucci has turned away from his former demi-god. Mooch is seeking former Trump regime officials to speak out against him, a quixotic quest if ever there was one. Moochi's story is a tale of fickle opportunism, but, hey, Mooch is slamming Trump, so have at it).


"I broke from Trump because not only has his behavior become more erratic and his rhetoric more inflammatory, but also because, like all demagogues, he is incapable of handling constructive criticism. As we lie on the bed of nails Trump has made, it’s often difficult to see how much the paradigm of acceptable conduct has shifted. For the Republican Party, it’s now a question of whether we want to start cleaning up the mess or continue papering over the cracks." -- from Mooch's Washington Post op-ed earlier today.

We're going with "papering over the cracks." Expect a continuing war of insults and accusations between Mooch and Trump, as their fragile egos get more and more bruised, so we see ourselves posting Mooch Musings from time to time.
Posted by Hackwhackers at 5:00 PM

"Drinking the Kool-Aid" is an overused term but in the case of trump it is totally fitting. I'd like to believe the Mooch has genuinely turned to the Light Side of the Force but it wouldn't surprise me if the two have a reconciliation at some point.

Beach Bum -- That's entirely possible, although Trump would want Mooch to grovel before him, something that Mooch may resist.

Think about others who have had the scales fall from their eyes. Michael Cohen, for example, who got as much from Trump as he could and then realized he was in the gunsights. And all of the others on the Grifter gravy train until they weren't. And how about those who sold their shriveled souls, like Lindsay Graham, still kissing Trump's ass. I can't wait to see him get thrown under the bus.

It's true that everything Trump touches dies. He sucks the life out of everyone like a vampire, pumping himself up like a bloated windbag, high on his own gas.

I want him gone, and all his sycophants, too.

donnah -- We couldn't agree with you more.