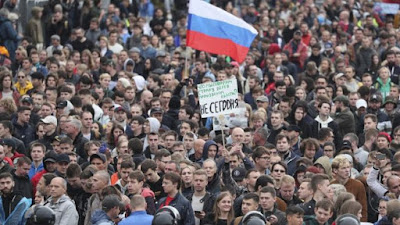 Earlier today, tens of thousands marched in Moscow to protest the exclusion of opposition parties in Moscow's city council election. Since Russian thug and autocrat Vladimir Putin seized power in 2000, he has worked to stifle political opposition and dissent by journalists. Russian authorities arrested about a dozen people in Moscow and 70 protesters in St. Petersburg who were demonstrating in support of the Moscow marchers.

In order to limit the impact of the demonstrations in Moscow, Putin's regime authorized them to demonstrate only in a less-travelled part of the city where they were hemmed in by buildings and highways. Not surprisingly, police detained Lyubov Sobol, one of the march organizers and an opposition party candidate for the city council.

Opposition leader Alexei Navalny was jailed recently, and has had bank accounts linked to him and his Anti-Corruption Foundation frozen by Putin's regime. The Foundation has published numerous investigative pieces on corruption in the Putin government, which runs on skimming public resources and bribery to the ultimate benefit of Putin himself, who is believed to be one of the richest men on the planet owing to the rampant corruption.

After having met several Russians and found them more obnoxious than Americans, I have absolutely no warm fuzzies for them. That being said, good for them staging this mass protest.

Beach Bum -- It's good to see any level of unrest there.