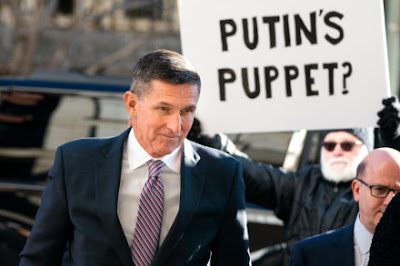 After months of back and forth with the devious  Russophile Michael Flynn, Trump's go-between with the Kremlin, prosecutors want to move forward with his sentencing. However, Flynn's lawyers are claiming that the Government is refusing to hand over sensitive evidence to the defense team. The judge in the case will review both sides' arguments on September 10.

Flynn was corrupt Russian asset Donald "The Chosen One" Trump's emissary to the then Russian ambassador to the U.S. Sergei Kislyak after the elections, and pled guilty to lying about his contacts with Kislyak over the lifting of sanctions against Russia. The sanctions were imposed on Russian oligarchs and industries in response to Russia's illegal annexation of Crimea and meddling in eastern Ukraine. Trump sent Flynn to signal to his handler Vladimir Putin that he would push to remove the sanctions, as a "thank you" for Russia's help in the elections and perhaps to shore up Trump's financial relationships with Russia.

Trump's criminal pressure on former FBI Director James Comey to "go easy" on his accomplice Flynn in early 2017 was one trigger for Special Counsel Mueller's investigation into Russian meddling in the election and other matters.  Time to "Lock him up!"
Posted by Hackwhackers at 4:30 PM