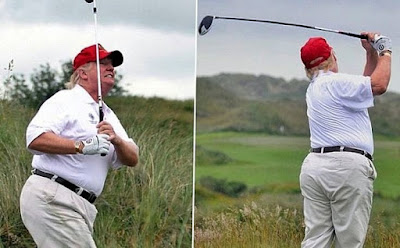 As he ladles out dishonest, conspiratorial chum to his cultish base, demagogue and pathological liar Donald "Very Stable Genius" Trump has racked up a $110 million tab to be paid by taxpayers for his obsessive golfing expeditions, usually to one of his "resorts" totaling 199 days. That means in the first 30 months of his regime, he's burned more taxpayer dollars than President Obama did in his 8-year term, something that right-wingers are strangely silent on.

As one observer noted:

All he does is watch TV, golf and scam the rubes https://t.co/gw0cLrlrnn
— Full Boar Socialism (@JesseLaGreca) August 14, 2019


(photo: The 19th hole's buffet is apparently his favorite hole)