Trumpty Dumpty Sat On A Wall 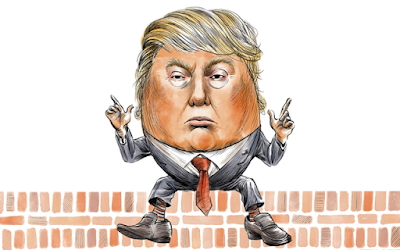 In addition to the economy, the construction of a wall across the southern border with Mexico is the one issue that demagogue and pathological liar Donald "The Chosen One" Trump had hoped to ride into the 2020 election. At practically every one of his Nuremberg rallies, Trump stirs up his bigoted red cap cult with claims about how well construction on his vanity wall is going. The truth, of course, bears little resemblance to Trump's claims, as Politifact reports:


"President Donald Trump continues to claim that his signature promise from 2016 — to build a U.S.-Mexico border wall — is well on its way, and that hundreds of miles will be completed by the end of 2020, when it’s time for voters to decide whether to re-elect him as president. Chants at his rallies have gone from 'build the wall' to 'finish the wall.'

But despite the chants and Trump’s repeated assurances that a border wall is under construction, what’s been achieved so far doesn’t reflect his campaign promise.

To date, the administration has replaced about 60 miles of dilapidated barriers with new fencing. And a major component of Trump’s pledge — that Mexico would pay for the wall — hasn’t been part of the equation. U.S. taxpayers have paid the cost." (our emphasis)

Trump TV and the right-wing media wurlitzer will ignore those inconvenient facts so that Trump's rabid base won't feel conned. When vast stretches of border without a wall appear in ads this coming year, that will take some really exceptional conning.
Posted by Hackwhackers at 6:00 PM

A couple of days ago, I overheard one of my coworkers, a rabid trump supporter and full-fledged conspiracy theorist, tell one of his cohorts that he didn't understand why the media was not showing video of the border wall being built. The conversation between these two was the definition of surreal. Both get their news from internet sources that makes Fox News sound like an agent of hyper-progressive liberalism.

I've written it before, these folks are lost causes.

Beach Bum -- It's difficult to sustain a democracy when a substantial number are disconnected with reality and facts, not to mention basic decency. They'll absolutely deny what's in front of their faces if it doesn't square with what they're being told by QAnon or Alex Jones. They are beyond reach.