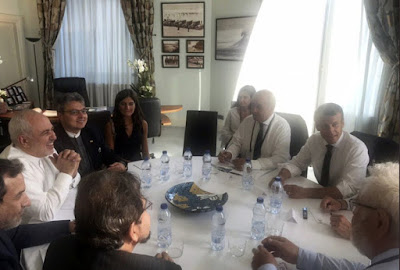 Iranian Foreign Minister Mohammad Javad Zarif flew into Biarritz, France while the G7 meeting was taking place, upstaging demagogue and mentally unstable con man Donald "The Chosen One" Trump. Zarif was invited by French President Emmanuel Macron to attend side meetings with his European counterparts. The quickly arranged trip blindsided White (Supremacist) House officials, who were unaware of Zarif's trip up until his plane arrived in France. The Iranians insisted that there would be no meeting with Trump or the American delegation, while they met not only with the French, but briefed the UK and German delegations.

Posted by Hackwhackers at 7:30 PM